(October 2015) - The Wemyss family, producers of Wemyss Malts Scotch Whiskies and Darnley’s View London Dry Gins, is delighted to announce a new limited edition to complement their award-winning blended malts range. The new 'Kiln Embers’ is a smoky addition to the Wemyss line up, blended with double the amount of smoky Islay malt whisky than its sister whisky, Peat Chimney. 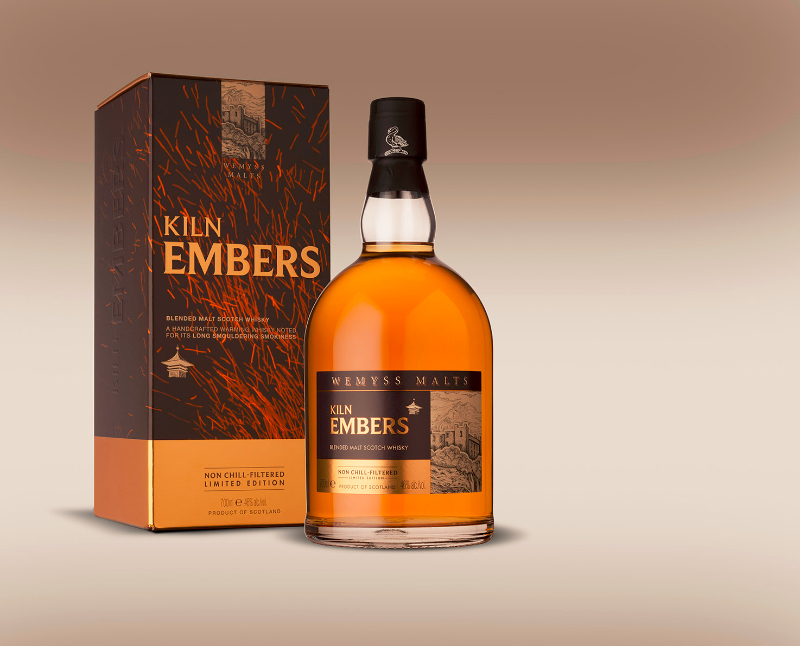 This no-age statement expression was created to offer an additional peaty dimension to the Wemyss blended malt range. Kiln Embers is also non-chill-filtered and bottled at 46% abv. With a limited release of just 12,000 bottles globally (2,400 allocated to the US market), it is presented in a gift box and will be available in NY, MA, PA, MN and CA with a suggested retail price of $69.99.

Like the rest of the Wemyss Malts blended malts selection, Kiln Embers is named after the whisky's natural flavors and aromas. The whisky's name and gift box are inspired by the barley malting process where peat is added to a kiln to develop the smoky flavors found in this whisky. On the nose, snuffed smoke mingles with salted lemons and sweet cured bacon; while oats and orange peel toast over embers and heathery peat on the palate; resulting in a sweet smoke finish.

William Wemyss, Managing Director of Wemyss Malts, commented: “When I started this business in 2005, I never envisioned the amazing breadth of flavors to be found in whiskies. Our new "Kiln Embers" is even smokier than our existing smoky favorite Peat Chimney and is a fitting celebration of our ten years in the industry. "

The Wemyss (pronounced ‘weems’) family seat is Wemyss Castle in Fife where they have lived since the 1300s. The family’s connection with the whisky industry dates back to the turn of the 19th century when John Haig’s first distillery was built on family land. Even today, barley from their estate in Fife is grown for many of Scotland’s leading distilleries. The Wemyss Malts whisky and gin portfolio is available in over 20 markets worldwide. The Wemyss family built a new single malt distillery in Fife at Kingsbarns which opened on December 1st 2014.

Palm Bay International, a dynamic family-owned company, offers one of the nation’s most comprehensive portfolios of imported wines and spirits, including over 50 suppliers from around the globe. Among Palm Bay’s most valued assets is its remarkable network of long-term partnerships with the foremost wholesale companies in all 50 states, as well as the Caribbean, Mexico and Central America. With the crucial collaboration of these partners, Palm Bay’s portfolio is able to meet the needs of every level of the industry, from independent restaurants and retail stores, to chain accounts, supermarkets, hotels, airlines, cruise ships, duty-free accounts and U.S. military bases. This impressive roster of brands, accounts and relationships positions Palm Bay as a major source of fine wines and spirits and an industry leader in the U.S. marketplace. For more visit: www.palmbay.com.

Get the latest news and information from our monthly newsletter