The team at Wemyss Malts believes that much of malt whisky terminology can be difficult to decipher, even for a knowledgeable consumer.  The expressions from the Wemyss malt whisky range are boldly named for the aromas and tastes found in the bottle, uniquely identifying each whisky. The three new single casks follow this naming convention and have been given intriguing, descriptive names to entice and guide whisky consumers.  Each cask yielded only a few hundred bottles and the resulting whiskies are extremely rare.  All are bottled at their natural color and are non-chill filtered at 46% abv. 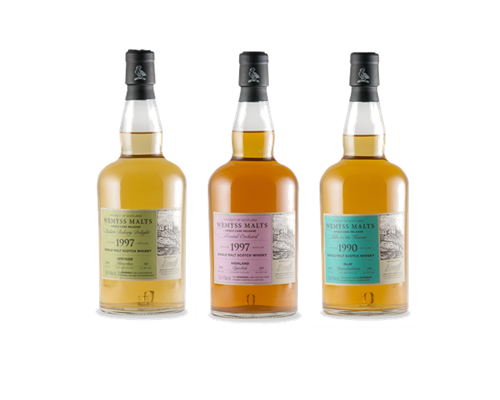 William Wemyss, Founder and Managing Director of Wemyss Malts, commented; “The U.S. is extremely important for us due to the rising interest in craft spirits, and we're delighted to introduce these three single cask, single malt Scotch whiskies exclusively with Palm Bay International.  These limited production bottlings are extremely rare and I'm sure they will be much sought after by Scotch connoisseurs.”

The Wemyss (pronounced ‘weems’) family seat is Wemyss Castle in Fife where they have lived since the 1300s.  The family’s connection with the whisky industry dates back to the turn of the 19th century when John Haig’s first distillery was built on family land. Even today, barley from their estate in Fife is grown for many of Scotland’s leading distilleries.  The Wemyss Malts whisky and gin portfolio is available in over 20 markets worldwide. The Wemyss family built a new single malt distillery in Fife at Kingsbarns which opened on December 1st 2014 and plan to open Darnley's Gin Distillery on the same site in summer 2017.

Palm Bay International, a dynamic family-owned company, offers one of the nation’s most comprehensive portfolios of imported wines and spirits, including over 50 suppliers from around the globe. Among Palm Bay’s most valued assets is its remarkable network of long-term partnerships with the foremost wholesale companies in all 50 states, as well as the Caribbean, Mexico and Central America. With the crucial collaboration of these partners, Palm Bay’s portfolio is able to meet the needs of every level of the industry, from independent restaurants and retail stores, to chain accounts, supermarkets, hotels, airlines, cruise ships, duty-free accounts and U.S. military bases. This impressive roster of brands, accounts and relationships positions Palm Bay as a major source of fine wines and spirits and an industry leader in the U.S. marketplace. For more visit: www.palmbay.com.

Get the latest news and information from our monthly newsletter